Compost with our Students

Gandhincul Cakra Maruti, Hamza Fikri, Julan Das, Madhumanti Bhattacharjee, Rajesh Raju and Vandana Mallipudi are AMS SDG ambassadors. They wrote this article and produced the video below (yes you have to wait until the end :) ) to educate the public on composting. They are making the world a better place, one compost bin at a time, this is their story! 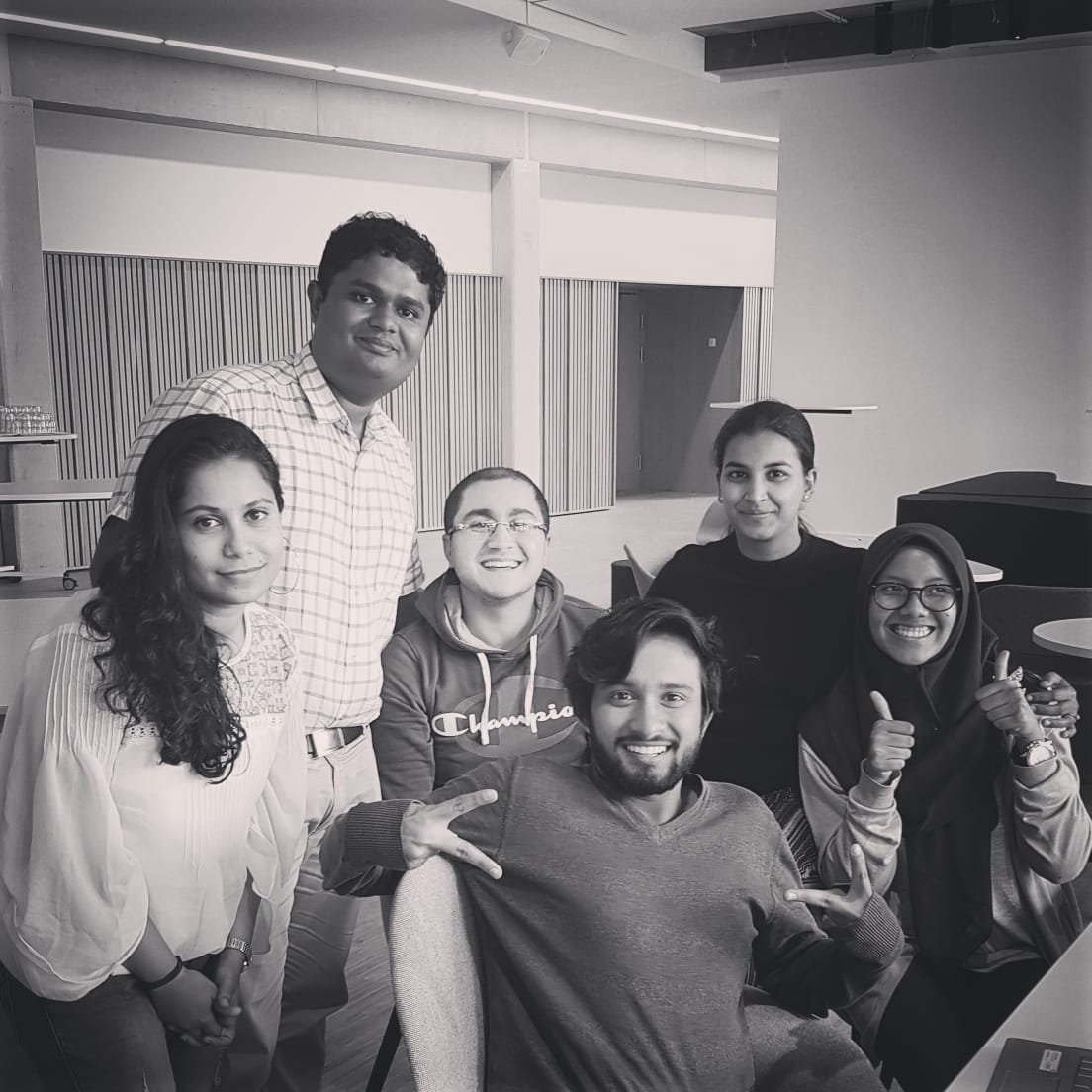 The World is changing rapidly due to the different kinds of activities like industrialisation, regular household waste, etc. that occur because of us in society. In our daily life large amounts of waste are produced on a regular basis, which includes a variety of items like plastics, metals, biodegradable waste etc.According to the official rules in Belgium, all kinds of waste are categorized separately in distinguished coloured bags and disposed off during the week. However, we can do it in a different way as a responsible citizen of the society. We can separate the biodegradable waste and utilise it for a better sustainable purpose, e.g. This kind of waste can break down quickly and can be used as fertilizer forplants. Therefore, we can produce compost in which all kinds of biodegradable items are turned into a natural fertilizer. For the environment composting is hugely beneficial, not only because it decreases the amount of garden waste and food waste thrown away, which in turn decreases the volume of methane greenhouse gas, but also a critical part of nitrogen cycle. Moreover, the plants need “nitrogen-rich” soil to fully grow and build protein. As a result, compost soil heap will be an addition to the natural cycle of nitrogen by returning the ground its enriched soil. On the other hand, it also means, fewer artificial chemical fertilisers are needingto feed the plants which ultimately results in much healthier produce.

This article will discuss the compost procedure in depth and show its potential for developing a sustainable lifestyle. Moreover, through this article we would also like to raise awareness among people and fight for a green society as stated by Ernest Hemingway, “The Earth is a fine place and worth fighting for.”

Composting Around The World

In china the people have been composting human waste for over 4,000 years and fertilising their land with it. What can be an appealing problem in some societies is turned into a valuable resource. Around the world between 33-50% of all food produced is never eaten, and the value of this wasted food is worth over $1 trillion.

Countries such as Greece and eastern European nations such as Bulgaria, Lithuania and Romania are doing almost no composting. Eventhen, some of the swiftest progress came from some former eastern bloc countries such as Estonia. The capital city of Talinn has been collecting biodegradable kitchen waste separately since 2007, part of the reason why landfill rates in Estonia have dropped from close to 100 percent 15 years ago to below 60 percent today. Moreover, Europe is well advanced than the U.S. in using anaerobic digestion, a process that takes organic waste and turns it into biogas in the absence of oxygen, which can be used to generate electricity.

The national waste legislation (2000) promotes and focuses on the principle of "Recycle Before Disposal" and clearly stipulates composting as an option for organic waste treatment. Currently, not even 5% of organic waste generated by cities is converted into compost. Promotion of City Compost to promote city compost in February 2016. The advertisements and punch line ‘Compost Banao, Compost Apnao’ (makecompost, use compost) did catch on but the lack of an appropriate market and ineffective implementation didn’t give this much-needed practice the desired popularity. India currently produces close to 1.5 lakh tonnes of solid waste every day and its biodegradable fraction ranges between 30 per cent and 70 per cent for various Indian cities. As you can see there is a huge potential for compositing, the most natural form of processing wet waste. But, uncontrolled decomposition of organic waste in dumpsites and leads to emission of potent greenhouse gases. So, it is very important we take necessary actions to promote appropriate disposal mechanisms for solid waste management.

In China, around 70 percent of all waste and 61 percent of household waste is food scraps. Researchers from China Agricultural University studied data from 2006 to 2008 and found that edible food thrown out by restaurants each year which is equivalent to nearly 10 percent of the country’s annual crop production are enough to feed 200 million people. A new waste recycling business, i.e., worm farm has been created and supported by the environmental department, with regular food waste supply and 115 RMB subsidy for every ton of food waste discarded.

How is Belgium doing?

How is Belgium and Antwerp acting on waste management and composting? 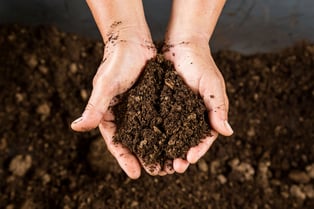 Belgium encompasses three regions, namely Flanders, Brussels and Wallonia. In the Flemish Region, the Public Waste Agency of Flanders, which is also called  as (OVAM), has seriously been giving attention to bio-waste treatment, composting, digestion and sustainable use of compost and digestate. It is convincingly worthy to mention here that the Flemish waste management policy focuses on waste management options through the following steps:
a) prevention, b) recuperation, c) waste treatment for recycling, d) incineration, and e) landfill.

From the early 90s, separate collection of waste started in Flanders. Collection of waste was  on the basis of types like bulky, household, commercial, construction, chemical, etc. In 2006, about 40 digestion plants started functioning. These digestion plants process combination of manure, energy crops and industrial biodegradable waste. These composting and digestion plants in Flanders produce high quality compost and digestate that are used as a soil improver or organic fertilizer in agriculture, horticulture, private households, and landscaping. No wonder Belgium is the European waste champion - thanks to its waste and recycling policy. In Belgium, each region and commune have a different system of sorting waste. Belgium boasts the highest recycling rate in Europe. Nearly three fourths of residential waste are reused, recycled, or turned into compost. Belgium has in place some successful strategies to manage and reduce household waste. Different types of waste are also taxed. Money is spent on educating residents about composting, encouraging  it in schools, and  introducing annual charges for the collection of garden and food waste. Till date, the home composting campaign has been successful to divert 100,000 tonnes of organic waste from going to landfill. The Belgian government runs various other campaigns to reduce waste, including promoting tap water, discouraging the use of plastic bags etc. Separate rules are made for different kinds of wastes and their treatment.

Thus, seeing a huge potential in improving methods of solid waste disposal in Belgium, we started our project for creating awareness with great enthusiasm. With 4 out of 6 being Asians in our group, we are well aware of the practice of ‘compost’ in our respective countries and the huge positive impact it has on the environment.

Composting is a method of recycling various organic materials(which are otherwise regarded as waste products) into healthy nutrient rich soil. The product derived from this method is called compost which is highly rich in organic matter and acts as an excellent source of nutrients for the crops and plants. Due to these stated benefits, gardeners fondly nickname compost as Black Gold.

The chemical fertilisers and pesticides are the compounds which are added to the soil to promote plant/crops growth. Although, they increase the crop yields and improve food production, but on the flip side they cause soil & groundwater pollution, food contamination, danger to aquatic life etc. Here comes the relevance of compost that can be used as a healthy substitute of chemical fertilizers and pesticides(which have huge repercussions on the soil and consequently our mother earth).

Composting is thus relatively simple to manage and can be carried out on a wide range of scales in almost any indoor or outdoor environment and in almost any geographic location. It has the potential to manage most of the organic material in the waste stream including restaurant waste, leaves and yard wastes, farm waste, animal manure, animal carcasses, paper products, sewage sludge, wood etc. and can be easily incorporated into any waste management plan.

With a view to raise awareness about composting, we the students of Antwerp Management School (AMS), have made a short, informative yet interesting video on what is composting, how to practice it and what are its benefits. We hope our viewers enjoy and learn from this video. From the above information, it is concluded that the production of waste is increasing and we as a responsible citizen of the society can take the initiative and adopt environmental friendly ways of disposing off our daily organic waste. Our goal right now should be zero waste adoption, and that can change our economic measurements to support an abundant economy that rewards community, efficiency, creativity, environmental protection and healthy families Hence, not only our health and environment will improve but also our economy. Compost is a very efficient and simple procedure which converts all kinds of biodegradable materials into a natural fertilizer without any chemicals and thus eliminates waste and prevents land pollution. So let's start composting as it is a step towards green environment and a healthy future.

Master of Finance teams up at Belgian Cyclocross Championship

On a sunny but chilly Saturday of January, ten Master of Finance students visited the Belgian Championship Cyclocross. For the foreign students this was a whole new experience. The race turned out to be a one-man-show by Wout Van Aert. The talented Belgian rider won the race with a 24” ...

END_OF_DOCUMENT_TOKEN_TO_BE_REPLACED

When I applied for AMS I did not have too many expectations, I merely wanted to get my degree and move on. First impression...  However, when I entered AMS the first time as a student, the vibrant scenery I encountered overwhelmed me. Having spent two months at AMS now, I am still ...