How to celebrate Christmas with your AMS-family away from home

Christmas is the most important festival for western people. On Christmas Eve, all the family members will gather together and have a big family dinner. What about the international students of Antwerp Management School who stay Antwerp alone? We had AMS family dinner together.

When we were preparing dinner, Asser from MGM brought an Egypt cooking class for us. He said that everyone who was watching him cooking should show a surprise face and say ‘wow’ when he put the garlic to the pot. ‘This is one of the Egypt traditional cooking ways. If we did not follow this tradition, then the dish would not taste good,’ he continued.

Ebu from MIE bought a very spicy goose dish for us. Being so good at music, she was the best DJ that night. 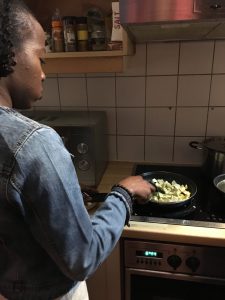 Thao Ly from MGSCM tried to cook a dessert which contained sweet potato and glutinous powder for us. She had it before but this was the first time for her to cook it. As we know, saying is always easier than doing. She did not follow all the recipe from the website, thus this dessert was different from what it was supposed to be. Finally, Parteek from MGM helped her to finish this dish. 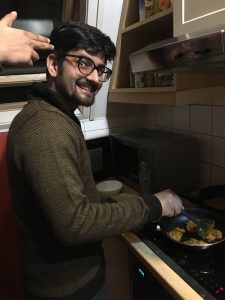 Parteek is helping to make the dessert

Around 7:30pm, all the dishes were almost done. 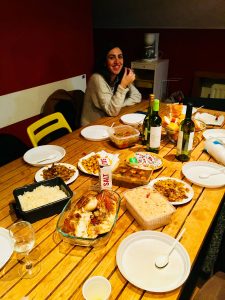 After the dinner, Siyi from MGM organized a card game called werewolf, which is very popular in China. After the introduction, Pilar from Uruguay and Kumar from India said that they had the similar card game in their home country. Therefore, it was not that difficult for them to learn how to play. The game is based on judgments, debates and votes. At the beginning, not everyone knew the rules so well but in general we enjoyed the game.

The party ended at 11:30pm but the fun will never end.

5 tips when applying for jobs

1. Look for companies with a corporate culture that fit your personal values and way of working When looking for vacancies, the first thing you should do is find out more about the company you are applying for. How are you supposed to get to know the company culture before without ever ...

END_OF_DOCUMENT_TOKEN_TO_BE_REPLACED

On November 23, some fashionistas from the Master of Innovation and Entrepreneurship went to the Modest Fashion Forum, an event organised by Mvslim. Mvslim is an organization that wants to inspire the next generation to aim for the extraordinary. The goal of this event was to put Modest ...

END_OF_DOCUMENT_TOKEN_TO_BE_REPLACED

Who are we? What drives us?

Dear reader, As our student-blog has been online for over a month, interesting articles have been posted, shared and liked and our famous hashtag #AMSLife has been booming and trending, we thought it may be time to reveal some inside-information about us: the editorial team. Who are we? ...